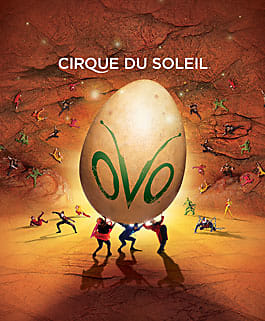 Last night, Cirque du Soleil previewed its most recent show, OVO, at the notoriously hard-to-get-to National Harbor.  But the trek was worth it because not only is the view at National Harbor stunning, but OVO was an even greater spectacle.

Despite our best efforts to sneak some photos, the event staff was almost draconian in their monitoring of attempted photo taking.  Through October 24, OVO will reside at the Plateau at National Harbor. 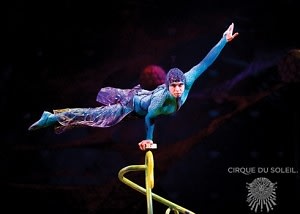 While no written account will do OVO justice, we can attempt to impart the multi-sensory escapade that is this show.  A veritable A Bug's Life come to life, OVO gives viewers a glimpse into a world occupied by insects, bugs, flowers and the like.  A dorky insect stakes claim to an egg that appears in the natural world, but its promptly pilfered.  He spends the duration of the show chasing both the egg and a buxom lady bug.

The costumes are suggestive of certain insects (the lady bug, spiders and grass hopers were immediately easy to identify), and were essentially amalgams of recognizable insect qualities or traits while not pointing to any particular creature.

Similarly, the soundtrack (we can't confidently call it a dialogue because it was not a verbal discourse) was a mixture of short and simple words or phrases (like "oh baby!" and "oh yeah!") but other than that, a combination of wind, string and percussion instruments worked 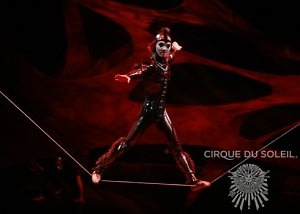 together to evoke a vague narrative understanding.  And the creatures "spoke" a kind of gibberish as well, but it was mostly unintelligible yet intelligible phonemes.

Of course, the acrobatic feats were other-worldly.  Performers flew, flipped, tumbled, jumped, contorted, twisted, bended and just plain gave a slight twitch of the head that kept the crowd perpetually on the edge of its seat.

The guy (left) on the tight rope not only glided along a rope that was not taught but slack, but balanced on a unicycle on the rope.  With his shoulders on the seat.  And peddled up and down the rope using his hands on the pedals.  Seriously.

Get yourself to OVO before it leaves town at the end of October.  It's is absolutely a must-see performance.