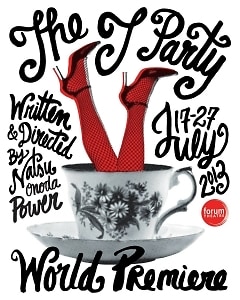 With all the events happening in the District this summer, it's easy to forget about the thriving theater scene. The T Party at Forum Theatre in Silver Spring reminds us that great theater isn't limited to to the Kennedy Center.

Directed by Georgetown professor Natsu Onoda Power, The T Party focuses on themes of gender performance, sexuality, and the changing ways we see masculinity and femininity. Before the play begins, actors and audience members mingle around the lobby and are invited to one of several parties including a prom, bridal shower, and a kindergarten birthday party.

Once at the festive fete, conversations arise about gender and sexuality and, it is at this point, you know this isn't your normal run-of-the-mill show.

Audience members are then directed to the theater were a series of vignettes unfold. The short scenes include conversations about phalloplasty, drag queens, otters, and love of both the emotional and carnal variety.

The scenes range from the lighted-hearted romp (there are go-go dancing dolphins) to the emotionally draining, but that's what's brilliant about this production. Some of the references may go over your head, but that's okay; in fact, it's almost the point. The small cast leads the audience bravely through these often taboo topics, ultimately resulting in a fulfilling and truly inspiring production.

Check out The T Party before it closes on July 27th. Tickets are available here.