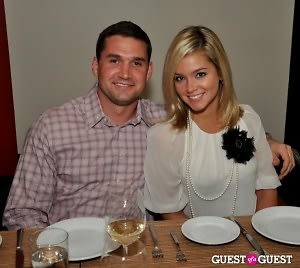 Forget "Take Me Out To The Ballgame!" Nats players will be singing "Going To The Chapel" during the offseason! Seven (that's right, SEVEN!) will be hearing wedding bells, as first reported in the Washington Post!

A whopping number of the men on the team will be tying the knot in the upcoming offseason. After a successful season, a wedding (or 7) seems like the only way to celebrate!

The players--baseball players, that is--and their extremely lucky ladies include Ryan Zimmerman and Heather Downen, who will be walking down the aisle this winter. Ryan admitted to the Washington Post that the wedding is all about having a good time.

“I think the biggest thing is just having fun,” [Zimmerman said.] “We’ve talked, and we’re excited obviously about the wedding, but I think we’re almost more excited about the reception and the after party. Very rarely do you get a chance to have both of your families, and extended families, too, together where everybody gets to have a good time. I think that’s the coolest part.”

The other six teammates heading down the aisle are Michael Morse, Ross Detwiler, Craig Stammen, Jordan Zimmermann, Edwin Jackson and Corey Brown. If you see any of them around town, wish them luck in their upcoming nuptials--and the rest of the season.