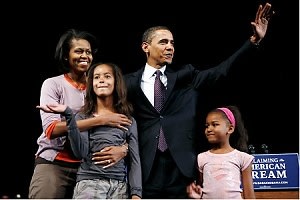 While Michelle Obama was talking about her daughters Malia and Sasha during her DNC speech, we couldn't help but notice the lack of camera panning on the first daughters. However, the Reliable Source reported that the girls were not there because they have school, and will be in Charlotte on Thursday for the president's acceptance speech.

Also according to the Reliable Source, this week, Malia started high school (she is now a freshman) and Sasha is starting 6th grade at DC's Sidwell Friends. This means, of course, that Michelle will have a second grueling round of "strategizing middle school friendships," as she said in her speech. Go get 'em, Michelle.

Note: Barack is also late to the convention, because he has to be there for their first day, according to the Huffington Post. This is likely a political move as we all know their grandmother takes them to school (and it's not actually a new school for either of the girls), but, it's still sort of cute.