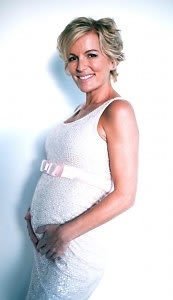 Last week, Real Housewife of DC Cat Ommanney announced that she and her boyfriend are expecting a baby, and that it's due late August. Oh, no wait, her next book is due in late August and her baby is due sometime after that.

She's been MIA from DC to write the book, Inbox Full Part 2, so we almost forgot about her. Good thing she is having a baby, otherwise, how would we have known about her upcoming literary masterpiece? Perfect timing!

BIG NEWS!!!! Someone said I was looking skinny but every time I look down, it just doesn't ring true ;) INBOX FULL PART 2 DUE DATE 26th August 2012 and this little bundle of joy later in the year!!! A magical surprise,completely out of the blue and my boyfriend,my girls and I are all over the moon with happiness and excitement! " *nips off to get another icecream*

The 40-something* has two daughters from a previous relationship, and divorced White House/Newsweek photographer Charles Ommanney after Real Housewives of DC aired.

*Literally no mention of her age anywhere on the World Wide Web.