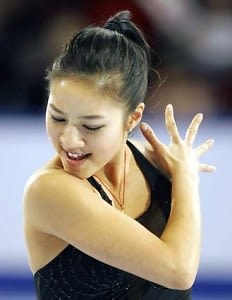 Michelle Kwan is adding another precious metal to her already impressive collection. According to People Magazine, our very own Michelle Kwan is engaged to Clay Pell! Congrats, lovebirds! Kwan, 32, recently moved to DC and is serving on the Council to Empower Women and Girls Through Sport. Her lovely beau is a director for strategic planning at 1600 Pennsylvania Avenue. Move over Bill and Hillary, it seems that DC has a new power couple in the making!

People reported that Pell proposed to Kwan in the WASPy wonderland of Block Island, Rhode Island on September 3rd. Pell's grandfather, Claiborne Pell, was a senator from the state. He is also the reason for academic Pell Grants, which were [obviously] named for him.

Kwan, let us know where you're registered!