Hillary Clinton sure does know how to accessorize. [Click] 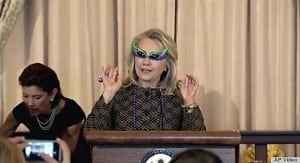 Obama offers his dating advice to the American public. [Tumblr]

In related news, if Obama was your boyfriend, he'd never let you go. [The Huffington Post]

Jane Lynch won't even talk about Bristol Palin. Hopefully the rest of America will follow suit. [Yeas and Nays]

Drake weighed in on the Great Georgetown Cupcake Debate by going to Sprinkles. [Yeas and Nays]

Salt-n-Pepa were reportedly in the District this past week. Cue the 90's nostalgia. [Distriction]

Your dad's old crush Kathleen Turner will be at Arena Stage. [Yeas and Nays]

Congress gets defeated by the Media. [Distriction]

Republican gays - yes, they exist - endorse Mitt Romney for President and all the other gays freak out. [The Village Voice]

We wish the best to newlyweds Ashley Taylor and Matt Bronczek! [GofG]