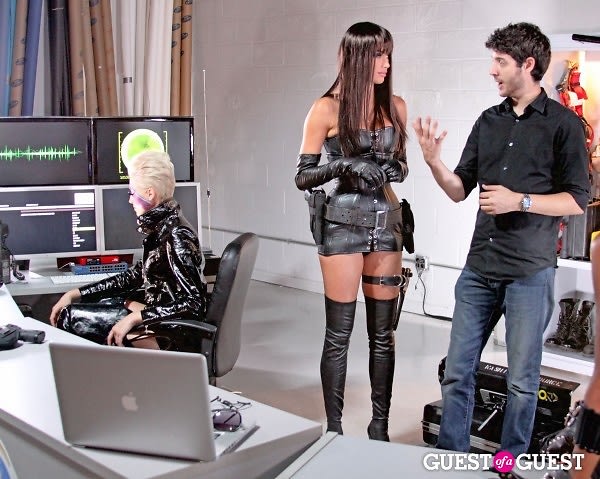 What would you think if you saw a leather clad Victoria’s Secret model with a matching Israeli P90 sub machine gun in our nation’s capital?    If you were working with 8112 Studios you would think it’s just another day at work. Victoria’s Secret model turned singer, Alina Puscau was in town to film her latest music video, “Red Light.”  Guest of a Guest was invited to the set to watch director Nicholas Cambata at work.  Alina, who told us she loves D.C., is the latest in a string of musicians that have shot their videos within the Washington, D.C. area.

So who is responsible for leading Hollywood’s invasion of the District?  This may seem like a no brainer and you might think the answer is Hollywood.  But you would be wrong and at most half correct. 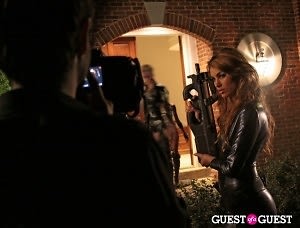 While director Brett Ratner (X-Men: Last Stand and the upcoming Brother’s Grimm Snow White) was involved with this project, the idea to shoot in D.C. came from 8112 Studios founder Nicholas Cambata.  Cambata has ties to the District, having lived in the area with his family and attended American University’s Kogod School of Business.

So when Brett Ratner called him to direct and produce Alina Puscau’s music video Cambata insisted that it be filmed in the DC area.  Normally 8112 is used to being flown out to L.A., Miami, N.Y., Vegas and various other locations to shoot.  This time, however Nick felt that Alina’s project should be shot in DC.  This is not the first project 8112 has brought to the District and they hope to bring more of Hollywood home with them.