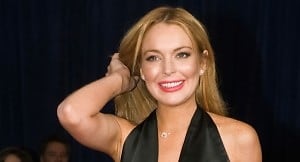 LiLo has spoken! The voice of a generation made her much anticipated declaration today that she will be voting for Mitt Romney. Well, "as of now." Can't that girl just commit to anything?

Lindsay spoke to E! Online about November's election and backed the Romney/Ryan ticket. I bet Romney's little conservative hands are just wringing with delight, knowing that she just thinks that he is so "grool." Her reasoning for voting for Romney? Via E!:

"I just think employment is really important right now," LiLo explained when asked if she was keeping up with the election. "So, as of now, Mitt Romney. As of now."

Well, DUH!!! She's been unemployed since freaking Herbie Fully Loaded!!! Maybe the problem isn't the government. Maybe it's just you, Lindsay. You can't commit to anything. You weren't even able to make it to your trial dates on time!

Lindsay, I bet you had a lot of time to think about your choice while you were doing your community service and camping out in rehab. You and your fellow felons/boozers probably spent countless hours debating the fiscal policies of Obama and Romney's stance on a woman's right to choose. But maybe you should REGISTER TO VOTE BEFORE YOU START SWINGING YOUR OPINIONS IN EVERYONE'S FACE!

That's right, folks, Lindsay Lohan isn't even registered to vote. The political fact-checkers at E! were really on their game today. It turns out that our favorite troubled starlet has yet to fill out the paperwork to cast her ballot. Maybe someone should tell her by simply telling people you're going to vote for someone doesn't ACTUALLY count as a vote.

But it's not her fault, guys and gals! Lindsay's probably confused. She probably figures that she can't vote because she's simply a British girl who came to America and found her long lost twin at summer camp.

Lindsay, I love you but please keep your mouth shut. I prefer to hear my political opinions from forgotten D-listers from Clueless. I'm looking at you, Stacey Dash.