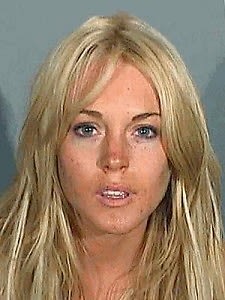 A number of things can happen now that Lindsay Lohan has been sentenced to 90 days in jail and subsequent in-patient drug treatment.  She cold FINALLY get her act together; she could delve even further into denial (perhaps to the point of no return); she could find God in prison (or Allah, or Kabbalah, or Shiva, whatever the case may be); or she could really explore this whole bi-curious thing she's been into as of late.

But whatever her options may be, she seems understandably torn up about the prospect of incarceration.  Either that, or the way in which the judge outlined every single transgression and lie she's ever committed.

Of course she's upset--nobody barring career criminals (which she is not, hopefully) welcomes the trip to jail.  But given the track record of her celeb-type friends, specifically Paris Hilton and Nicole Richie, she shouldn't do much more than 3 percent of her sentence.  We can learn a thing or two about the mug shots of these law-skirting lasses, and prognosticate the outcome of the whole LiLo scandal. 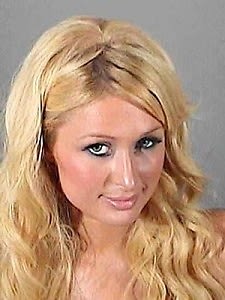 Paris, as you can tell by the self-conscious pose of her mugshot, is clearly more concerned with her public image than Lindsay is.  At Paris she does her drugs and drinking (if any) in private/a way that not every paparazzo can capture. 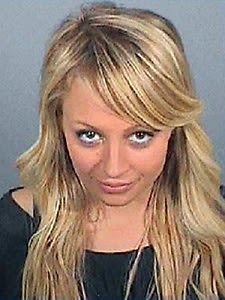 Nicole Richie, on the other hand, looks embarrassed here (note: head bowed down, not posed.  Or is that just because she knows her nose looks funny shot straight on?).  This mug marked the beginning of her trip to motherhood, clean-living, and all-around awesomeness (minus that whole eating issue thing).  If only Lindsay had looked less obviously yak-ed out of her mind, we could see hope on the horizon for her.

Isn't it telling that at this current trial, Lindsay sported the same blond mess of a coif as she did the night she was originally arrested in 2007 AND was wearing an alcohol monitoring bracelet at the time as she is now?  Apparently, girlfriend has yet to learn her lesson.  Perhaps this is why the judge though it best to school Miss Lohan.