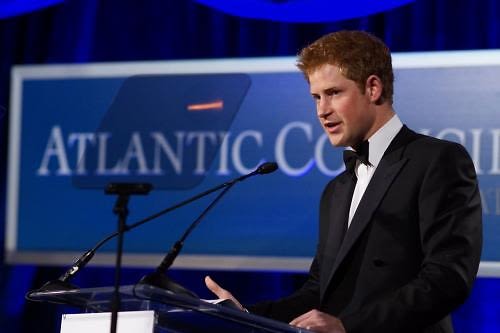 Prince Harry is coming to the US next month for a six city tour from May 9 to 15, according to a press release from Clarence House. One of those stops will be right here in DC.

While in Washington, his royal hotness will swing by Capitol Hill for an exhibition on landmine clearance, one of the duties that comes with being a new patron for HALO Trust (his mother was actively involved in the organization as well). HALO Trust's Guy Willoughby and Cindy McCain will also be there.

The prince, who will become fourth in line to the throne once his brother's baby is born, will attend a reception and dinner at the British Embassy, hosted by British ambassador Sir Peter Westmacott, which will highlight humanitarian mineclearance.

He will also visit the Arlington National Cemetery and wounded soldiers at the Walter Reed Medical Center.

The royal family tends to be very hush-hush about where the royals stay on their visits, however, the St. Regis is known to be a favorite of the Queen--and, the prince's trip to the states just so happens to conclude with the Sentebale Polo Match, which is sponsored by the St. Regis. The Hay-Adams, Four Seasons, Mandarin Oriental, Park Hyatt and either of our two Ritz-Carltons are also ready for royalty.

We're not Vegas, sure, but should the hard-partying prince decide he wants to let loose while he's here, POV at the W, Smith Point in Georgetown, The Huxley and L2 Lounge would all be safe bets due to their familiarity with upscale clientele (although Washingtonians will gawk at him either way).