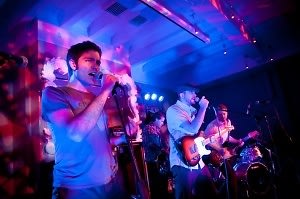 People always warn you not to date musicians, saying they're notoriously flaky and will just let you down. Despite this advice, we had high hopes for our night with Adrian Grenier on Sunday after seeing his band, The Honey Brothers, perform at the Boom With A View event at the W Hotel. Until he disappeared...We thought he'd be different, not a commitment-phobe like the rest of the creative male population, and really thought between sharing cotton candy Pop Rocks and sultry glances with each other it was love at first sight!

Many in D.C. are wondering what happened to Adrian Grenier Sunday night. Rumors were he was continuing his holiday celebration by hosting the after-party at Eden following his performance and watching fireworks at the W. People waited at the club, anxious for his arrival, hoping they too could woo Vinny Chase for the night. But to no avail, for the Entourage star never made it to Eden. 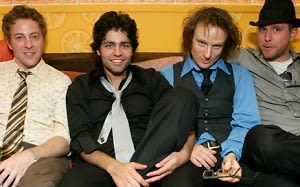 For those of you looking for answers for the disappointment you endured while hopelessly waiting for Adrian Grenier to show up at Eden, I have your answer. Don't be mad at me, I'm just the messenger here, but he traded meeting you, intelligent and sexy you, for a piece of meat. Literally. Adrian and his band dined at J&G Steakhouse at the W Hotel late into the evening and most likely ended up either in a food coma or hanging out with The Killers who performed at the White House that night. Also at the W were the Salahis, but unless they crashed Adrian's dinner, we're placing bets that he was with The Killers instead of at Eden.