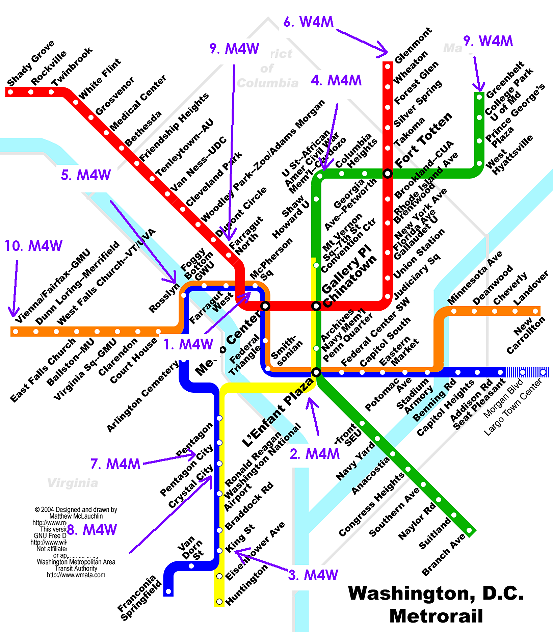 As a service to the city and in an effort to bring some joy to all you hopeful romantics, we reluctantly browsed through all the missed connections of the DC Metro .. Half for amusement and half for the hope that maybe we are actually helping mankind find their long lost crushes/loves or people they just want to bang.

No matter what the case is, hopefully our hardwork will bring lovers of the city together! Check it out:

1. M4W- To the Orange Line Vixen: You were carrying an orange sweater, with orange toenails, coming into downtown on the orange line!

2. M4M- To the Salt & Pepper Officer: You are an 0-4, your admirer is impressively an 0-5 (whatever the hell that means...) He got off at L'Enfant, you stayed on the yellow line. You are an USMC- Marines need love too!

3. M4W- To Tattooed Temptress: You were trying to listen to your iPod, some lady was talking too loudly "LaVerne, I need my hair cut..." Your admirer got off at King Street and wants to take you to coffee!

4. M4M- To Dark Sunglasses: You got on the green line at U Street with your admirer, you asked if you could sit next to him. Write him back and he will gladly give you more than just his seat..

5. M4W- To Geek Chic: Your admirer couldn't work up the nerve to talk to you before he had to transfer at Rosslyn. He wants to talk nerdy with you girl..

6. W4M- To Receding Hairline Hunk: Your dark-skinned admirer in striped pants rode the yellow line with you at Crystal St. and got out in Chinatown, then you two took the red line to Glenmont. She wants the digits dude.

7. M4M- To Young Asian Reader: You sat next to your admirer on the yellow line from L'Enfant Plaza to Pentagon City. According to him, you peg the cute-o-meter at a 10!

8. M4W- To Stunning Sky Blue Shirt: You both got on the yellow line at Crystal City, he got off at L'Enfant Plaza, you stayed on.. He wanted to talk to you but didn't want to interrupt your jamming to your iPhone. Do lunch, and you guys can jam out together!

9. W4M- To Butt-Grabbing Bad Boy: You helped your admirer find her car at Greenbelt Metro Station.. She wrote down the wrong number, she wants to see your handsome face again. Reply with your number so you can play some more grab ass with her!

10. M4W- To Seductive Lady Humps: You took advantage of the packed metro on the orange line to Vienna to get discreetly close to him, falling into his arms with every stop. He wasn't ashamed of what was happening (although, more than likely, he was imagining most of it).. He wants your number and to finish where you guys started!