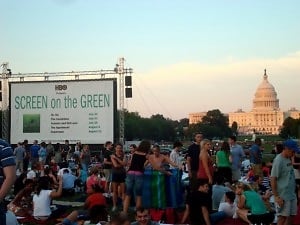 HBO sponsored Screen on the Green until last spring, when it cited financial issues as the reason for no longer funding the DC iteration of Screen on the Green.  Interestingly, at that time, HBO continued to fund the NYC version at Bryant Park. 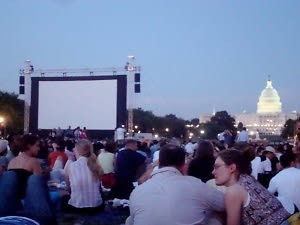 But thanks to some super pushy, art-loving DCites, namely Jesse B Rauch and Lauren Miller, DC's Screen on the Green is back this summer.  Rauch and Miller started off by blasting social media outlets such as Facebook and Twitter, to spread the word about the potential end of Screen on the Green.  They then paired up with the D.C. Film Alliance, a non-profit that brings together films, film makers and the public.

Their hard work paid off--Screen on the Green returns this year, for its 11th birthday.  Starting this coming Monday, July 12, through Monday August 2, you can find an insanely large screen on the National Mall between 4th and 7th Streets NW.  Last night, they hosted a kick-off party at The Spy Museum.

Here's this years film line up:

July 12: Goldfinger (1964) The third James Bond film, starring Sean Connery in which '007 gets his claws in a Mexican drug lord's cartel.

July 19: The Goodbye Girl (1977) Richard Dreyfuss.  Won and Oscar.  After being dumped by her live-in boyfriend, an unemployed dancer and her 10-year-old daughter are reluctantly forced to live with a struggling off-Broadway actor.

July 26: 12 Angry Men (1954) The courtroom classic in which a jury decides the fate of young Latino wrongly accused.

August 2: Bonnie and Clyde (1967) Before there was Natural Born Killers, there was the original Bonnie & Clyde.  B & C are lovers who rob banks.  How romantic.

Below, Beyoncé and Jigga Man's homage to Bonnie and Clyde.