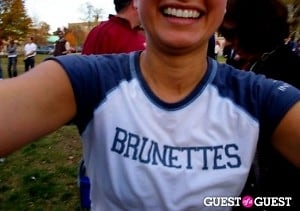 It's August, which means three things in young Washington: Congress is out of session, Dewey Beach is calling your name, and Blondes vs. Brunettes donation soliciting emails are pinging your inbox.

After observing the phenomenon of fifty young women hitting the same small circle of friends for cash, giving to this organization has become an art form. How horrible would it be to donate your allocated BvB budget of $100 to a girl you didn't particularly mesh with, only to realize your favorite coworker is on the other team?

We suppose this article could apply to girls as well, but girls already know which of their best friends are passing the pigskin, and typically skew toward donating to their hair color's team, understandably.

This group of ambitious ladies raised over $100k for Alzheimers last year. They're out for $125K in 2011, which means they're out for blood.

Avoid getting tackled by their emails, and take some tips from a BvB donating pro:

There are two major deadlines the powderpuff posse must hit: September 1 (draft day) and November 12 (game day). The top 10-15 fundraisers are guaranteed spots on the team, which is why September 1 is so important.

Due to this, the full roster of all eligible footballing females is available by August 30. [Blondes] [Brunettes]

Wait, and donate on August 29. Often, girls are called the night before draft day to know they've made the team. Donating on August 29 gives your donation enough time to count toward draft day.

Write down a list of each fundraising female you know, from both rosters. This includes the ones that you think might hate you. Cross-check these girls with your email history. If you didn't get a donation soliciting email, then it's probably because she hates you; cross their names off. She does not even want your name coming up on her donation scroll. If you did get an email, now is a time to redeem yourself.

Look again at the fundraising pages. Are there any girls that are, like, thousands of dollars ahead of everyone else? Cross their names off your list, they already have their spot on the team. Should they ask you later for a donation, use your best judgement.

Get in your head the amount you want to donate.

Split that amount by the number of names remaining on your list.

You should also see a significant decline in BvB solicitation emails, with the exception of their bar night fundraisers (consider going--it's a great way to meet new chicks because they always bring their friends). Likewise, there will be an uptick in ladies coming up to you at bars, giving you a big hug, and thanking you for being so charitable.