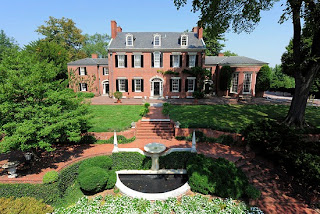 Evermay, a 3.5-acre estate on 28th Street in Georgetown, sold for $22 million to Bio-tech millionaires Ryuji Ueno and Sachiko Kuno. According to Reliable Source, Ueno and Kuno keep a very low profile and are little known outside the medical or Japanese-American communities.

HISTORY OF THE HOUSE: Evermay is over two centuries old, and was originally built by Samuel Davidson. With his brother John, they owned about 300 acres in the heart of the city. This area includes a part of the land where the White House now sits, Lafayette Park, and on northward to Dupont Circle. In 1792-1794 he bought property in the northeast part of Georgetown in several transactions from Thomas Beall, part of a 795-acre tract called the"Rock of Dumbarton," patented to Bealls grandfather, Ninian, in 1703. Dumbarton Oaks, Dumbarton House, Tudor Place, and other large estates on the area were also carved out of this tract. The last deed to Davidson already referred to his property as Evermay. After carving out his own private plot of land, he built the Evermay home for just $2,302.82. That includes the cost of the land and the legal fee for recording it, $665.67. He also got a hefty discount on the construction; he operated a brickyard where today's Lafayette Park is. Thousands of his bricks were used to build the White House and the "Federal Bridge."

The house overlooks Rock Creek Park and Oak Hill Cemetery. There is also a great view of the Washington Monument from the upper terrace. The gardens weren't magnificent until the Belin family bought the home, and they moved there to live in 1931. Ferdinand Lammot Belin and his wife, Frances, completed the restoration of the house and meticulous creation of the gardens during this time. While in Washington, he served at the White House during the Presidency of Herbert Hoover as Chief of the International Conference and Protocol Division, and then as Ambassador to Poland in 1933.

There are many rare shrubs and flowers in the Evermay gardens, many of them plantings from brother-in-law of F. Lammot Belin, Pierre duPont. He had his own famous property, Longwood Gardens, located just outside Philadelphia. Among the plantings are a super-rare Franklin Tree, not found in the wild. It grows loudly and proudly on one of the terraces.

The home was passed down for three generations through the Belin family, and most recently it was maintained by Harry Belin--Lammot's grandson. He did not live at the estate, but lives in Potomac with his wife and did his best to maintain the property as a place for weddings and other events (booked through the nonprofit Evermay Society), before the Georgetown neighbors fought him to close the gates due to noise complaints.  In spite of the setbacks, he did a great job with upkeep of the property and attempted to find temporary and long-term renters of the property presumably with little success, and decided now was the time to sell. Among the ways he saved money was prioritizing the various features of the home; usually, the fountains were dry.

The middle Belin was Peter Belin, father of Harry and son of Lammot. Peter Belin became a leader in Georgetown historical preservation efforts, which resulted in the neighborhood being designated as a National Historic District. While a student at the Sorbonne in Paris, he booked his journey home on airship Hindenburg, which famously caught fire as it landed in front of a large crowd and several journalists, marking the end of the golden age of airships. Among those in the crowd were Lammot and Frances, who didn't see Peter (and assumed he was dead) until he distinctly whistled at their car, departing from the parking lot.

Evermay was originally listed for $49 million, and it was rumored that Oprah Winfrey was considering purchasing the estate to be closer to the newly elected first family.

The home has 22 rooms: eight bedrooms, six bathrooms and five half-baths, a gatekeeper's house, a free-standing studio and 100 parking spaces.

EVERMAY WAS ALMOST NEVERMORE: According to curbed.com, the estate almost met its end in 1919. Developer Francis H. Duehey bought the property and planned to demolish the house and build a hotel on the site. The citizens of Georgetown rallied to pass an ordinance forbidding construction taller than 40 feet. Duehey gave up and sold the property to the Belin Family in 1923. It takes a certain buyer to want 3.5 acres of history in the heart of Georgetown, more specifically, one with a fat paycheck. According to Forbes.com, each of them collected salaries of $835,000 in 2010, not including stock. Regarding stock, their company Sucampo made $61 million in revenues in 2010, and together they "directly and indirectly" own a majority of the capital stock of R-Tech, an affiliated Japanese company.

Sucampo was founded by the two in 1996 and is headquartered in Bethesda, Maryland. Their principal product is Amitiza, and they focus on the discovery, development, and commercialization of treatment of a wide range of disorders using prostones. Prostones are a class of compounds, derived from fatty acids, that occur naturally in the human body.

According to their bios on S&R.org, Kuno spends much of her time in philanthropy, and sponsors many events put on by the Smithsonian and Washington Opera. S&R is their philanthropy, which works in partnership with other nonprofit organizations to further the talents of young artists and scientists. Ueno is an experienced Class A race car driver. He is a member of Leica Historical Society of America, Ferrari Club of America, and Miles River Yacht Club.