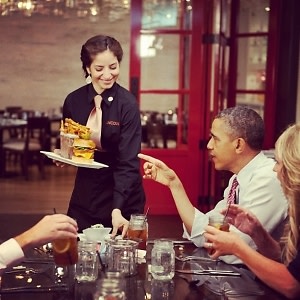 The Inauguration 2013 fever is officially sweeping the district. If you already have your gowns and tuxedos picked out, dinner plans are next on the list. One of the top places to dine in celebration of President Barack Obama's second inauguration is Lincoln, the restaurant named in honor of President Abraham Lincoln.

Lincoln will be offering a presidential menu--quite literally. The six-course tasting menu is influenced by six of America's presidents' favorite food. Fried chicken, Clinton? We had no idea.

Don't let the inauguration celebration stop at the food. Make sure to try one of Lincoln's cocktails that follow the theme, like the Emancipation Punch or a Lincoln Sour.

The menu will be available for $45 (plus tax and gratuity) from January 18th until the 21st. It will offer:

[photo from his Donor Dinner at Lincoln via]