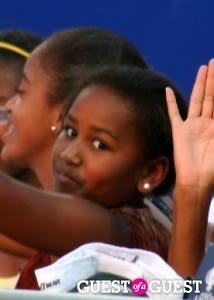 Little Sasha Obama, 10, has joined her big sister Malia, 13, at the middle school campus at Sidwell Friends. School began for the first daughters on September 6.

Sidwell Friends has their middle school program beginning with students entering 5th grade, a year before most American middle schools.

The President and First Lady have taken great measures to make sure their daughters lead lives that are as normal as possible. Instead of getting a ride to school in a motorcade, their grandmother Marian drives them, according to Politico.

Tuition for Sidwell's Middle School program is $32,960/year. It was less than $30,000/year before the Obama children first enrolled just three years ago. The Obamas, not taxpayers, pay their daughters' tuitions.