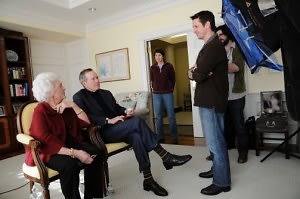 HBO will air 41, Jeff Roth's documentary featuring George H.W. Bush, his wife, and their picturesque Kennebunkport manse. Early reviews do not seem to friendly to the film, stating that it trivializes the former president's accomplishments and focuses on the personal aspects.

The documentary will air this Thursday evening at 9pm on the cutting-edge cable network. The 88-year-old former Commander-in-Chief shows great warmth and personality, according to Lloyd Grove's review for Sexy Beast.

Jeff Roth, the director, opts to highlight George and Barbara's life on the WASPy Walker's Point estate instead of their time at 1600 Pennsylvania Avenue.

It’s too bad, then, that Hollywood impresario Jerry Weintraub—the elder Bush’s unlikely friend and neighbor in Kennebunkport, Maine, who produced this prolonged valentine—decided, along with director Jeff Roth, to trivialize Bush’s impact on the nation and the world.

For the personal WASPy tale of George H.W. Bush from Andover to the White House to Kennebunkport, check out the documentary this Thursday at 9pm on HBO.