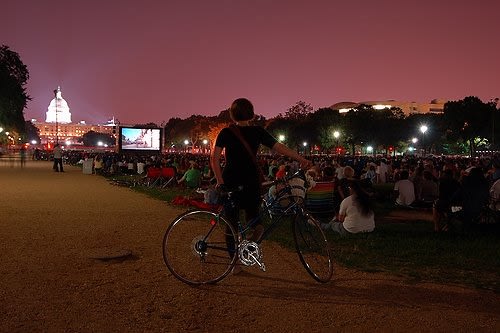 Starting towards the end of July, Screen on the Green, every Washingtonian's favorite summer movie festival, will once again commence on the National Mall. Just a few days ago, the lineup for this summer’s festival was announced, displaying yet another wide range of classic films for everyone's viewing pleasure.

Since 1999, thousands of movie-goers have gathered on the lawn of the National Mall for the showing of classic films under the florescent glow of the Capital.

According to Friends of Screen on the Green, movie start times are often 8:30pm.

How to prepare for this event? Easy. Bring a blanket or a chairs, some movie theatre snacks, and get to the Mall area as early as you can to set up your spot on the green then you’ll be set! To this day, Screen on the Green remains one of the traditional summer events in the District, and if you can't wait until July, try checking out other outdoor movie alternatives such as DC Golden Cinema Series at Heurich House Museum, which started June 7th and runs though July 12th! Hitchcock's Rear Window runs this Friday, June 14th.