This summer, something new is coming to Half Street by Nationals Stadium: "Fairgrounds," a combination food, market and events space that will be open seven days a week from the beginning of baseball season through October 1. Fairgrounds will use salvaged shipping containers as retail spaces for vendors.

The space "will rotate over 100 food trucks through the space over the course of the season," Bullpen owner Bo Blair told Guest of a Guest. He will have two "permanent" food trucks there, based off his restaurants Bayou and Surfside. The two trucks will serve drinks, and an additional bar will be built at Fairgrounds. 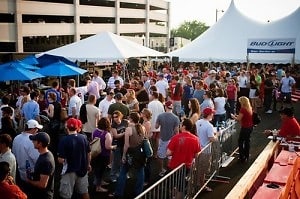 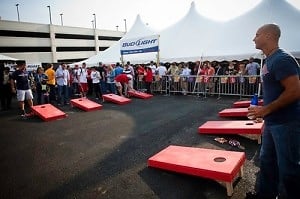 This is bad news for Das Bullpen fans, which will be retired to make way for Fairgrounds. However, The Bullpen will still be in full swing, serving up signature Red-Bull-Vodka slushies. Bullpen will be "a major component of Fairgrounds," said Bo Blair.

"There will be a 'spectator' deck built on top of the shipping containers as well as a music stage, with plans to continue to have local and regional bands play on game days. And of course there will be 20 HD televisions and plenty of cornhole sets."

The space is cleverly created to expand or contract for several scenarios: the containers can be arranged to create a larger space on big game days, or be moved halfway down the lot once landowner Akridge kicks off inevitable construction on the lot, slated for the end of the summer. 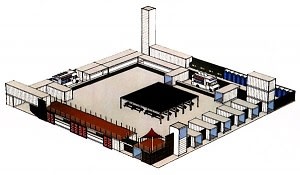