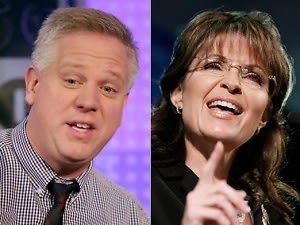 A recent Vanity Fair article that profiles Sarah Palin also contains this invaluable tidbit of knowledge: Beck will schlep to Alaska next week, on a day that happens to be the same day the world trade center was attacked (9/11).  He and Palin will appear at "Anchorage's biggest venue"

which we imagine has a capacity of around 2,000.  This Dena'ina Center has a funny name because it was built in homage to the indigenous peoples of Alaska to whom America restored honor when we colonized the place and therefore delivered them from evil.

Palin's peoples claim she's not announcing any presidential candidacy at her playdate with Beck, because doing so would be crazy.  Think about it: all the hairspray for her Snooki poof, the designer duds off of which she'd have to cut the label lest some middle class citizen discover she's wearing...some French couturier whose name he or she cannot pronounce but sounds fancy and therefore must be expensive.  Putting too much effort and thought into your appearance is very un-American, kind of like goat cheese.

What will Palin and Beck pontificate about?  We imagine they will wax poetic about the upcoming season of Dancing With The Stars, in which Palin's daughter Bristol will compete.  Palin and Beck will use their onscreen charisma and general cultural intuitiveness to engage in an in depth discussion about the upcoming season.  Discussion topics will include:

whether or not David Hasselhoff will break a hip

when one of Audrina Patridge's implants will pop,

and most importantly, who would be the better catch for Bristol: Hasselhoff or the Situtation.

Additionally, this epic Anchorage event could be the perfect time and place for Beck to announce his new event planning company.  The as-of-yet-unnamed enterprise will specialize in bastardizing milestones in U.S. history by coincidentally holding shindigs on anniversaries of serious political happenings.  For his next trick, he will orchestrate a mass baptism at Ground Zero for all the crazy Muslims who want to build a mosque there and destroy freedom.  Baptisms will be available for the duration of Ramadan.