Herman Cain’s 5-minute gaffe on Obama’s Libya policy, recorded by the Journal Sentinel editorial board, has gone viral on Youtube in less than a day. The entire brain fart is worth watching. [Youtube] If you can’t watch the video at work, save it for later, but here are some memorable moments. 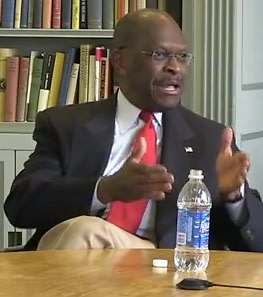 0:11 – Herman Cain takes ten seconds (yes, ten whole seconds) to collect his thoughts on the question of whether he agreed with Obama’s handling of Libya. It’s an awkwardly long time to stay silent before having nothing of substance to say.

0:23 – Herman Cain asks if Obama supported the uprising in Libya. Not a good start.

0:44 – Cain starts to say he doesn’t agree with Obama, but then stops himself before saying, “No, wait, that’s a different one.”

1:10 – Cain admits he does not understand the question.

1:40 – Cain says he would have done a better job at “determining who the opposition is.” Really? Did you hear they toppled Gaddafi and are now setting up a new government? ‘Cause it was in the news…

2:55 – Cain says, “I’m not criticizing him. I just would have assessed the situation better.” Touché, Mr. Cain.

3:20 – Another memorable quote from the stumbling Cain: “Some people say that as president, you’re supposed to know everything. No you don’t.”

Cain’s gaffe is the latest from the Republican presidential candidates in this election season. Now, all three of the frontrunners have made serious vocal missteps that have severely damaged their respective popularity (and perceived electability).

Last week, Rick Perry famously “stepped in it” by saying he’d cut three agencies of the US government, but couldn’t name them.

Will the real Republican candidate please stand up?