As the weekend comes to a close, so too does the Obamas' excursion to the northern most New England state, Maine.  Despite criticism that Obama is spending too much leisure time and not enough political time, he did not seem bashful about enjoying family time.

What's the first thing the the First Family did upon arriving at the Bar Harbor Airport?  The Obamas, after having read our suggestions as to where to go and what to see on Mt. Desert Island, headed over to Acadia National Park, where they took a bike ride, and climbed Cadillac Mountain.

As we predicted, the Seal Harbor Club was too exclusive to host the Obamas on its grounds.  So they headed to the Bar Harbor Club instead, which was happy to accommodate the First Family. 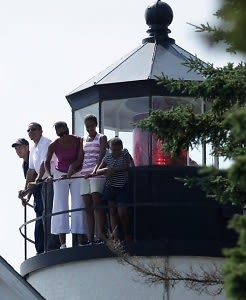