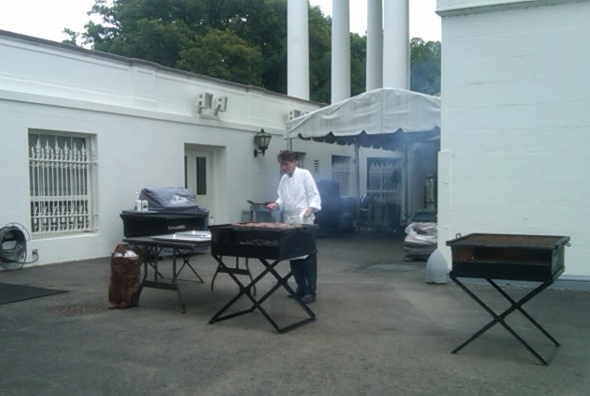 President Obama celebrated Wednesday night in Chicago with huge fundraisers, but celebrated the actual evening of his birthday Thursday night with a patio party for about 200 in the White House Rose Garden.

There are basically no photos from the 5-hour "fabulous but casual" private party except this photo of their chef setting up the scene, via the Obama Foodorama blog.

Politico did a succinct run down of the VIPs that attended:

According to Obama Foodorama, Stevie Wonder sang a song and Whoopi Goldberg was also there. His family also attended, including not only Michelle and their two daughters Malia and Sasha, but Michelle's mother Marian Robinson. Marian Robinson lives in the White House with the first family. There were also children of guests at the event, so it sounds like Malia and Sasha had some new friends to dance with.

Although Gayle King was there, it does not sound like Oprah Winfrey was there with her.