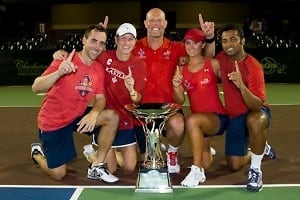 It's in every Washingtonian's DNA to love DC's professional sports teams--the Redskins, Capitols and Nationals, to name a few of the most popular. But what about DC's winningest team, the Washington Kastles?

The Kastles are a franchise of the World TeamTennis Pro League, owned by local entrepreneur Mark Ein, that boasts some of the most impressive names in professional tennis. The team's roster includes superstar sibling duos Serena and Venus Williams and Anastasia and Arina Rodionova, and non-siblings Leander Paes and Bobby Reynolds.

In 2011 the Kastles earned a place in American sports history by becoming the first team in the 36-year history of World TeamTennis to go 16-0 and the first undefeated U.S. pro sports team since the 1972 Miami Dolphins.

Now, Kastles fans can relive the team's incredible quest for victory in a documentary entitled “The Perfect Season: The Washington Kastles Quest for History” that debuted last night on Comcast Sports Network. The documentary will also air on June 30 at 10:30am; July 1 at 12:30am; July 5 at 12:00am and 9:30pm; and July 8 at 12:30am.

In addition to the documentary, CSN will be broadcasting two live Kastle matches: the July 12 home opener against Martina Hingis and the New York Sportimes, and the July 22 match against the Kansas City Explorers, both of which will start at 7pm. League play, which will go through July 28, is scheduled to begin July 9.

Yes, we know that old Nats shirt might be super comfy after 200 washings, but try showing your DC pride by swapping it out for some Kastles gear because, let's be honest, having an undefeated hometown team is a great thing to brag about.