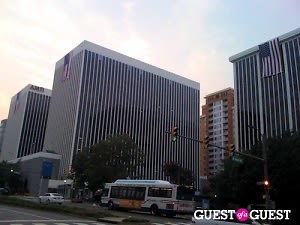 The high-rises of Rosslyn are flying huge American flags in remembrance of the September 11 terrorist attacks 10 years ago.

On that day, 184 men, women and children lost their lives when terrorists crashed American Airlines Flight 77 into the Pentagon in Arlington, Virginia. Casualties included 59 passengers and crew on board the plane, and 125 military and civilian Pentagon personnel. They were among the nearly 3,000 people killed in attacks on the Pentagon and the World Trade Center, and on a plane that crashed in Shanksville, Pennsylvania.

Rosslyn is the area of Arlington known best for having the tallest buildings, but all Arlington (and District) residents are encouraged to fly flags this and next week. 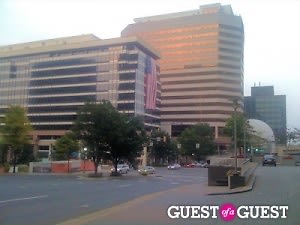 On September 10-12, some of the commercial buildings will light their rooftops, according to Rosslyn Blog.

Arlington will be hosting a 5K from Crystal City that runs by the Pentagon, a free tribute event at the Air Force Memorial (overlooking the Pentagon) and several other events to commemorate the occasion.

Several locations in D.C., including the Smithsonian, Newseum, and the National Cathedral will be having memorial events.