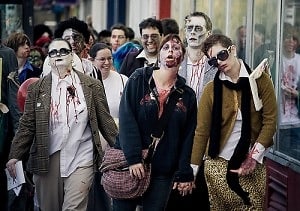 Let us warn you, something might be amiss this Saturday night in Old Town Alexandria.  In the name of charity,  Survive Alexandria is orchestrating a monstrous game of zombie tag through the cobblestone streets of Old Town to benefit Capital Big Brothers Big Sisters. Allow us to concede three observations:

2) We like the idea of people dressed up as zombies running around houses and down streets that are as old as George Washington.

3) Notice in the Facebook Event Page the emphasis of no weapons being allowed...uh yeah, the makeup and costumes will be scary enough.  Please let there be no psycho zombie impersonator running around with a gun, we don't play that. 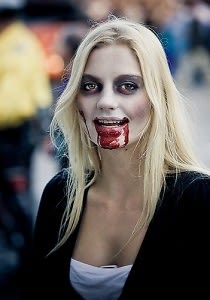 This morbid game, hosted by Urban Evolution, instructs participants to dress like zombies, wear glow sticks signifying if they are dead or alive, and run like hell to checkpoints without being tagged and consequently turned into the living dead.  Prizes go to those who can evade being zombiefied and for the zombies who tag the most runners.

Too bad our fave zombie nemesis, Woody Harrelson, is unlikely to show.   But for a good cause and something totally out of the norm, we think Survive Alexandria will be something to be seen on Saturday night.