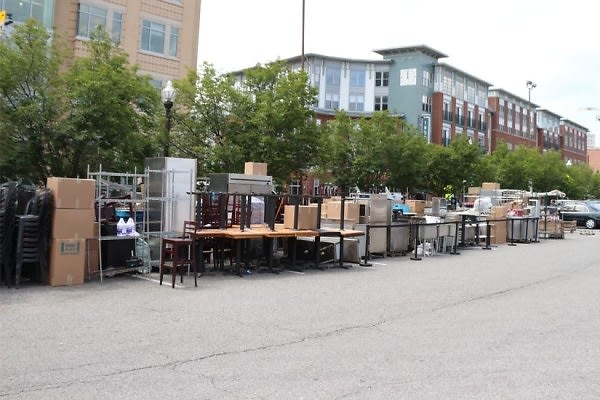 Rosslyn was littered with remnants of the old Ray's Hell Burger and Ray's Hell Burger Too over the weekend, according to a report in ArlNow. Tables, chairs, kitchen equipment and other items were moved out and onto the street: a final straw from their former landlord at the Colonial Village Shopping Center over unsettled rent bills.

Since being locked out of the Colonial Village locations in January after an initial round of grilling, owner Michael Landrum re-opened across the street with a larger Ray’s to the Third.

The gourmet burger chain became famous after President Obama visited it in 2009 with Vice President Biden, and again in 2010 with Russian president Dmitry Medvedev. Since the presidential visits, repeated comments on Yelp popped up (and now in the ArlNow article comments section) from customers about how the portions, service, and food quality are going downhill.

We hope this tasteless display of a dispute gets settled soon!