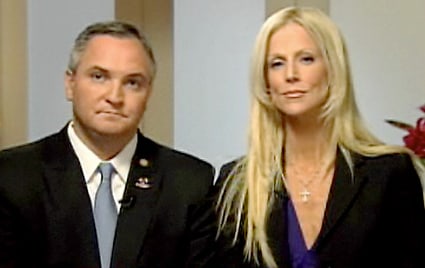 According to TMZ, Michaele Salahi fled from Tareq because he was scary and threatened her safety. She is now filing for a legal separation.

"The final straw came on September 11th. Michaele claims she returned from an errand a few hours late, and Tareq turned out all the lights and waited for her in the basement...telling her she needed a lesson in fear. Two days later, Michaele fled to Neal...fearing for her safety."

She might be dating Journey guitarist Neal Schon, but we "stopped believing" her stories a long time ago. Or do we? In either case, it is just the latest in a string of Salahi drama that hasn't stopped since they crashed a White House State Dinner in 2009.