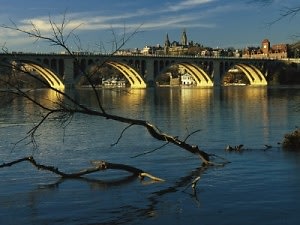 This week, we found ourselves shocked at a Washington Post headline declaring that the dreaded Potomac River is actually…clean. We’ve seen the Potomac recently in all its gray/green murky glory, and not willing to believe such rumors without proof, we read on. As we suspected, it turns out that the headline stating “Potomac Cleans Up Its Act” is merely an act in itself.

"We've solved maybe 20 percent of it [pollution in the Potomac]” and “the Potomac is still full of other pollutants that have led District authorities to warn about swimming in it and eating its fish. Its ecosystems have been scrambled by invasive species, including snakehead fish. And an unknown chemical in the water is making male bass grow eggs”

Has caused male bass to grow eggs?! Apparently, the “clean” Potomac is actually causing gender discrepancies in fish, can’t be swum in or fished from, and is still 80% dirty.  So what does the article actually mean by “clean?” It turns out that the river now has less algae. That is all. Don’t be fooled by happy headlines when seeking respite from the heat, DCists—you heard it at Guest of a Guest: The Potomac is still effing dirty.