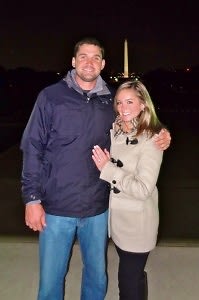 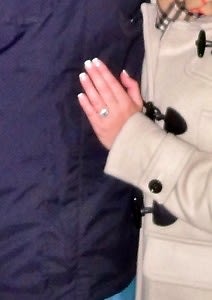 Step aside, Kate Middleton. We reported last week on the news of Ryan Zimmerman proposing to his girlfriend of two years, Heather Downen, but details are slowly emerging about the proposal that will make you have sticky sweet puppy love for them.

1. He asked Mr. Downen for permission. Ryan quietly took him out to lunch a week before, like a total gentleman.

3. He popped the question about thirty minutes before her birthday, at 11:30 pm. They had just returned from games in Chicago and NYC, and Ryan suggested they get all DC, so to speak, and grab dinner at Old Ebbitt and walk around the monuments. Heather Downen told Guest of a Guest, "we made our way to the Lincoln Memorial, where he told me he had gotten one more thing for my birthday and he got down on one knee and proposed."

4. It was a total surprise. The two had not walked around the monuments together at night, and she was looking forward to a romantic evening--but did not know anything would happen.

5. There is no date set yet. They will have to plan around his baseball schedule, so the wedding could happen late 2012 or early 2013.

At the Nationals Opening Day the next day, the pair celebrated and shared the news of their engagement with friends and family. To make it even sweeter, Ryan concluded the game by scoring the winning run. *Swoon!*