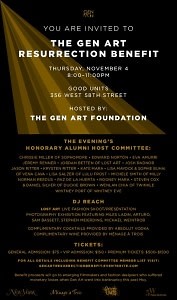 Talk about an art world Lazarus. Gen Art, the erstwhile arts and entertainment org for emerging artists and designers that filed for chapter 7 bankruptcy in May, just sent us an invitation to its Resurrection Benefit. We spoke with Gen Art Founder Ian Gerard; check out the low-down on its resilience and reinvention:

Gerard said he's stoked for the event at the Hudson Hotel's Good Units. With an "honorary alumni host committee" including Lisa Salzer of Lulu Frost and Whitney Port, the event is well-pegged to an upcoming sale of Gen Art and its assets via a public bankruptcy sale. Because Gen Art has been in bankruptcy protection and will have its assets sold at public auction around November 19, Gerard felt now the ideal moment to act.

"So, this is a timely and last minute opportunity for our charity (The Gen Art Foundation-a different entity) to fulfill on its mission of providing grants to emerging talent,"

he wrote by email, adding that in this instance, his organization would provide grants to artists who did not receive money owed to them because of Gen Art's insolvent state. 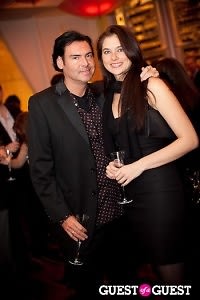 But the event is the same night as Art Walk, which could be seen as something of a combating party clambering for the same list of attendees.

"We are aware," Gerard said, but said a limited time window and had to accommodate the venue. He also felt safe that because a junior set of Art Walk tickets runs at $250, his lower price point of $75 would appeal to a different audience and not risk too much overlap.

But one point of tension is lingering--fear that Gen Art could fade into permanent obsolescence, according to Gerard:

"There is the possibility that this could be the last Gen Art ever...with the impending sale--it just depends on who and for what purpose acquires Gen Art."

Gerard remains optimistic about this intriguing missing piece of the puzzle

"We, however, remain hopeful that we will find an acquirer who will work with former management to relaunch the brand--continuing its mission of showcasing and supporting emerging talent--but with a new business model and approach."

This event, Gerard told us, seeks to epitomize the Gen Art experience, which hinges on events thrown to promote or expose an audience to emerging artists and their work. Before a crowd Gerard expects to reach 1,000 people, this event will showcase the work of designer Jordan Betten of "Lost Art." Betten will run a live photo-shoot/presentation where he will unfurl his leather collection (worn by everyone from Lenny Kravitz to Steven Tyler) and also his painting skills with live models posing for him. 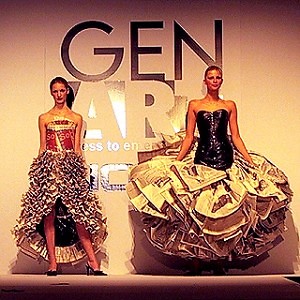 Five rising photographers will flank Betten, all with the backdrop of DJ Reach, who will be perched on the second floor directly above Betten's fashion installation.

As for the crowd, Gerard expects,

We look forward to seeing who, if anyone, scoops up Gen Art to further the trajectory of its artistic path and mission.