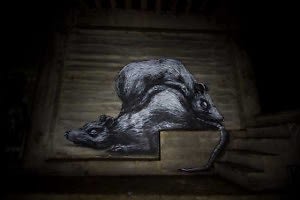 Apparently there's more going in the buried regions of abandoned subway than rat overpopulation, colonies of mole people, and fighting grounds for the Teenage Mutant Ninja Turtles. There's some seriously cool art. The Underbelly Project, started last year, has led 103 artists from all parts of the world to a secret forgotten station to paint for one full night "unobstructed by the pressures of commercial sales, email, or daily routines." 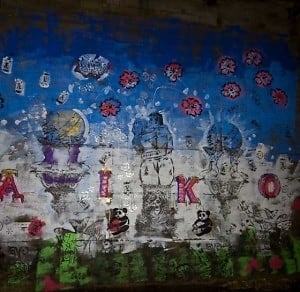 In that way, the clandestine show is a reaction to the growing popularity and monetization of street art. The shows curators, Workhouse and Pac, recently spoke with the NY Times about the project noting how people had sawed down walls to steal Banksy's work and ripped off electrical panels in order to own their very own Shepard Fairey. "It was commercialism at its worst. Early in the street-art years, I relished the ability to feel like I was my own island. The Underbelly was our way of feeling like we were an island again. We finally had a space in the world that collectors couldn’t contaminate. A space that couldn’t be bought."

To go along with this theme, none of the artists, which include Ron English, Patrick McNeil, Swoon, and Revok, were paid and all covered their own expenses for travel and supplies. Banksy, the most well known and main stream of this kind of artist did not take part because he was busy promoting his movie Exit Through the Gift Shop. He did send the curators his best wishes though with the message:

"Great project, love it, but I can't risk going in." 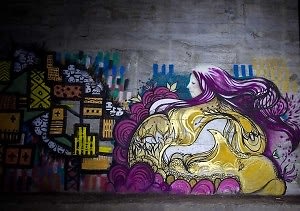 For those hoping to catch a glimpse of the project, good luck. It was open to a select few for one night only.  It has already been sealed and the equipment used to get in and out destroyed.  If you're an urban adventurist or part of the MTA, Gothamist proposes that the space may be housed in the abandoned station under the South 4th Street stop in Williamsburg or under the Shell station at Utica Ave. Access is gained via an active subway stop, so it's likely South 4th but there are dozens of abandoned stations so it could be anywhere, not to mention highly dangerous to try and find.  It's probably just easier to take a look at the artwork on The Underbelly Project web site once it is completed.