The art world loses an icon; Kanye West and Jay-Z release new album cover art; Mariah Carey's ex-husband opens art gallery in the Hamptons; Damien Hirst sells out; and subway goers have one less thing to look forward to with the capture of the Mustache Bandit and more. Read on for the latest news in the art scene.

American artist Cy Twombly, known for his large-scale, calligraphic graffiti  paintings, died in Rome yesterday at the age of 83 of cancer after several days of hospitalization. Twombly was regarded by many critics as one of the world's most important living painters alongside Jasper Johns and Gerhard Richter.

In a statement from the gallery that represents Twombly, Larry Gagosian said: "The art world has lost a true genius and a completely original talent, and for those fortunate enough to have known him, a great human being. We will not soon see a talent of such amazing scope and intensity... For me personally, it is an incredibly sad day and my thoughts are with Cy's family and close friends." 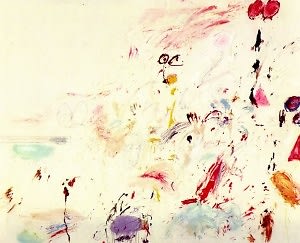 The Givenchy designer created the gold cover with sun ray motifs and detailed embossing of shapes familiar from recent Givenchy collections—think of the origami leather gowns from the last couture collection. The album has been in the works for nearly a year and Kanye West describes it as ‘very dark and sexy—like couture hip-hop.’

The former head of Sony Music, known for cultivating such stars as Carly Simon, Mariah Carey (his second wife), and Jennifer Lopez has partnered with Ryan Ross, of Palm Beach's Arcature Fine Art for the new space. Mottola chose East Hampton to launch Gallery Valentine since according to him, "There's never been a serious gallery out here in the Hamptons".

However, if the lack of focus of the art, which ranged from new works priced at $5,500 to blue-chip pieces priced at $3.5 million, or the short six month lease is any indication of his seriousness, then perhaps Mottola is a fish out of water and will come to realize that art may not be a better business than music as he gestures at the walls and says, "You can't download this."

English artist, Damien Hirst's design for the Red Hot Chili Peppers' new album, I'm With You can not be described without using the words minimal and subtle, especially in comparison to the artist's past works. Hirst shocked critics and the public alike with his work Two Fucking and Two Watching, 2007, a rotting cow and bull which was banned from exhibition in New York by public health officials and none will soon forget the diamond encrusted skull valued at $100 million. Perhaps not even Hirst can top Hirst.

Graffiti artist, Joseph Patrick Waldo, 26, was apprehended by the police after successfully eluding capture for over a year. Since last June he has used a felt-tip marker to write the word 'mustache' in curly cursive script on the upper lip of various advertisements in the subways. He faces charges of felony mischief, misdemeanor criminal mischief, and graffiti.

His mustache graffiti is alleged to have caused more than $1,500 in damage to New York Transit property. Waldo situated his practice within the broader tradition of "subverting advertisements," claiming to be inspired by Banksy, as well as such lesser-known lights of the NYC street art scene as Elle, Judith Supine, Primo, Quel Beast, QRST, Shin Shin, and Specter. Lesson to be learned: You can only write on the street walls if you are already hanging on the gallery walls.