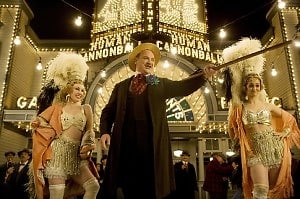 New Jersey Governor Chris Christie announced plans for a state takeover of Atlantic City's perpetually endangered casinos yesterday. The hope is to restore some glam to the beleaguered seaside town, the kind seen in Martin Scorsese's upcoming Boardwalk Empire. But could the series itself be a good omen for AC?

Christie's plan ignores the obvious in a couple of ways. There's the dubious logic behind New Jersey's famously corrupt  government pulling AC back from the brink. But Boardwalk Empire is also waiting in the wings. Scorsese produced the series and directed its pilot. Scorsese likes to give his movies' settings as big a role as Robert DeNiro or Leonardo DiCaprio. And he's got a knack for capturing a neighborhood or city's state of mind just as its mood's about to swing.

The Little Italy of Mean Streets survived for a while after the movie's 1973 release, before its "social clubs" and small time hoodlums gave way to nightclubs and big time pretty young things. (Also mostly lost: Italians.) In 1976 Taxi Driver immortalized the scuzzy but electric Times Square, which would get worse before it got better (debatable) while, for very different reasons, remaining a place most New Yorkers desperately avoid. And Casino showed Las Vegas on the cusp of a transformation from mob-run vice city to sanitized theme park and Cirque du Solei headquarters. 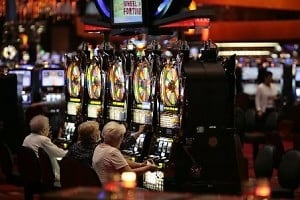 Scorsese is looking in the rear view mirror and not out the window with Boardwalk Empire, which is set during Prohibition. But historical perspective doesn't preclude the series from commenting on today.

Boardwalk Empire shows a city in its prime and in a way is the inverse of Taxi Driver. It doesn't expose the sordid contemporary, but glamorizes bygone halcyon days. Today, some New Yorkers living in a rejuvenated city watch Taxi Driver and miss the old dirty, poor, hooker-ridden Times Square. It's unlikely that anyone in a down and out Atlantic City will see Boardwalk Empire and understand that longing for decrepitude.