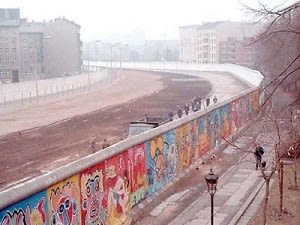 The more neighborhoods slip away, the harder people try to pin them down. In NYC people cling to a past that maybe never really existed in the face of a hazy, inferior future. And since New Yorkers insist on comparing other cities to their own, it's tempting to do the same with Berlin.

To oversimplify for the sake of orientation, the eastern half of the city is to the west what (the old) downtown and (new) north Brooklyn are to uptown Manhattan.In Berlin this divide has less to do with slow, organic shifts in immigration patterns, industrial outsourcing and fickle real estate preferences than with that brutal monolith, the Berlin Wall, and its dismantling 20 years ago that was just as abrupt as its construction.

Since then the old west Berlin remained the wealthier and more static area of town. The old communist east, its industry largely abandoned and identity to be remade, welcomed hordes of subcultures--artists, punks, skinheads. Some of these 'hoods have gentrified, with others well on their way to respectability.

As in New York, with its feisty community boards and cottage industry of nostalgic and bitter blogs chronicling block-by-block "Disneyfication," what hasn't changed is an acute sense of pride in one's stomping grounds. Given Berlin's sprawling size, it makes sense that people stick to their kiez, the area within a three- or four-block radius of their home. And they fight for the survival of its elusive spirit.

Want to sympathize with (and maybe annoy) the locals during your next Berlin visit? Here's some simple arithmetic to get you acquainted: 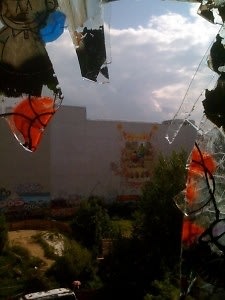 Mitte = (SoHo - 15 years) + Lower East Side + (Midtown / 20): The central neighborhood in the unified Berlin (mitte meaning middle), Mitte is spared the indignity of being a drab commercial district by the fact that Berlin has little commerce and, even after the fall of the Wall, no real center. Instead, Mitte clings to its reputation as gallery central (like at studio/squatter/show space Tacheles, right), despite skyrocketing rents, fashionably funky restaurants and proximity to what pass for Berlin's tourist traps.

Prenzlauer Berg = [(Park Slope + Punks) - Lesbians] + (Mars Bar / Prune): In the former East Berlin, these days Prenzlauer Berg is less known as a haven for punks and skins than double-wide strollers and some of the most expensive real estate in the city (which would still be a steal in Manhattan...or Park Slope). A few anarchy symbols still tag the walls, but more evident is the scourge of yuppie white people worldwide: a cute, crowded brunch scene. 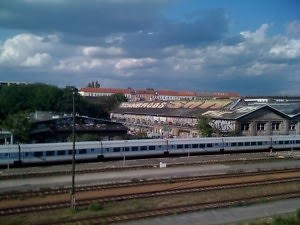 Friedrichshain = Bushwick + Ludlow Street: In the former East, Friedrichshain only emerged as a go-to district for trendster vendors in the last five years or so. It's still got that eerie, urban tumbleweeds feel in parts (especially around its rundown train station, Warschauer Strasse, left), but boasts a main drag, Simon-Dach-Strasse, that come weekends is a magnet for bar crawlers and repellent for locals. 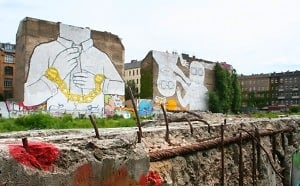 Kreuzberg = [(East Village x 2) + Jackson Heights] - Murray Hill: Kreuzberg was the epicenter of alternative culture and avant garde (and often protest) art in the former West and, being boxed in by the Wall on three sides, its most isolated and impoverished kiez. In addition to a 30% Turkish population, Kreuzberg overflows with street art and is pleasantly devoid of striving bourgeois bars (though not stylish bordering on precious ones). The question is how much longer the immigrants and cool kids can keep Kreuzberg to themselves.

Rummelsburg = Sunset Park - (Park + Mexican Food): Off the beaten path and without Sunset Park's culinary draws, green spaces and, apparently, human inhabitants (a friend described it as "nothing"), even Berliners furrow their brows when you mention a party going down in Rummelsburg. For some people, that's reason enough to get there, before everyone else does.