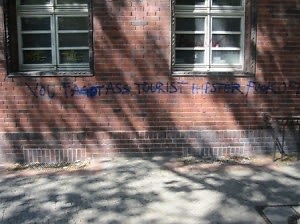 Yesterday I compared Berlin and new York neighborhoods. Differences outweighed similarities. But one thing Berliners and New Yorkers have in common is anger with the intruding tourists, developers and pioneers of cool who reshape their cities beyond recognition. -

Here are a few of the shared public enemies:

As outspoken as New Yorkers are, we mostly keep gripes about tourists to ourselves. There's that "Go Heart You Own City" T-shirt, but when faced with dazed out-of-towners, New Yorkers are more than happy to offer directions (OK, sometimes they're misleading directions) or recommendations. Berliners don't lash out verbally at visitors (how many dumb Americans would be able to understand them?), but leave...spirited visual warning signs to back off. 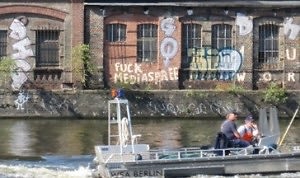 Mediaspree is a gargantuan development proposal that has given Berliners a red rump for the several years it has fought for final approval. The project would reconfigure the banks of the Spree river through much of Friedrichshain (on the east) and Kreuzberg (on the west), converting the largely public stretches of land to private office use.

Salt in the wound: the waterfront land was inaccessible for four decades thanks to the Berlin Wall, whose longest surviving stretch has been converted into murals showcased at the East Side Gallery. Corporate headquarters (including MTV's) are surely the lesser of two evils when you consider the armed guards that once dominated the barren no man's land between the strips of the Wall that flanked the Spree. But the irony of the sort of capitalism once impeded by the Wall filling that once-deadly void is too much for famously bohemian Berliners to bear. 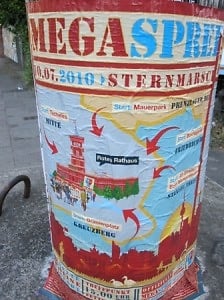 Unlike the hotly contested Atlantic Yards project in Brooklyn, Mediaspree would displace fewer full-time residents than transient squatters who fill the riverbank's abandoned buildings and hedonists who crowd its freewheeling, all-hours hangouts (like Bar 25, Maria am Ostbanhof and Club der Visionaere). For now, the opposition is using the dark cloud as another excuse to party. On my first night in Berlin, techno blared from dozens of boats nearly sinking under the weight of packed decks full of happy protesters drinking and dancing their way up the river as part of the Megaspree resistance movement (left).

They might be happy to know that a Lonely Planet guide from 2007 noted Mediaspree as the death knell that necessitated go-while-you-still-can visits to endangered bacchanals. (Bar 25 seems to have thrown marathon farewell bashes every Labor Day weekend dating back to 1983.)

Parties weren't meant to last, but in Berlin they only come more alive as the noose tightens. 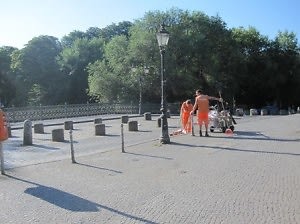 Neukölln is a neighborhood south of Kreuzberg that has gone from backwater to burgeoning oceanfront property almost overnight. Proving that gentrification patterns are the strongest shared bond between cities across the globe, Neukölln's rise (or fall) is the story of a dingy immigrant neighborhood on the fringes of the city drawing young, hungry artists with cheap rents and vacancies just screaming to become airy cafes. Pioneers move in, then worry they've destroyed the fabric of the district they "discovered" (check out some of the breathless Neukölln chatter on ex-pat forum Toytown and hand-wringing in Exberilner), especially when the New York Times chimes in with the official baptism announcement. There's even a purifying portmanteau, Kreuzkölln, that emphasizes the kiez's well-established northern boundary.

Like the forces behind the new neighborhood acronyms introduced weekly in NYC (NoLiTa? BoCoCa? SoBro?), the upsetting, inevitable changes in Berlin prove it's harder to decipher a name than what it's naming.