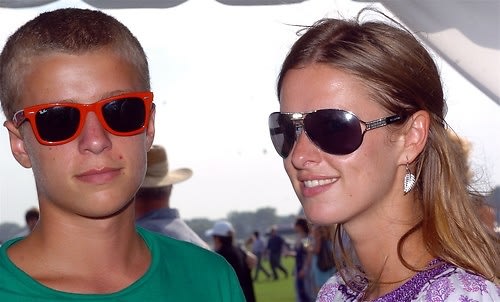 [Conrad and Nicky Hilton at Bridghampton Polo opening. Photo via Hagin' in the Hamptons]

This Saturday July 19th marked opening day of the 2008 Summer Season of the Mercedez-Benz Polo Challenge, a day not dared to be missed by Polo fanatics OR social scions. Probably one of the most quintessential things to do on summer Saturdays in the Hamptons is to attend the polo matches at the Bridgehampton Polo Club on Hayground Road.

By “attending Polo”, I’m not talking about pulling up to the field with a basket full of cold cuts and some wine coolers to enjoy while watching the games from the bleachers. I’m talking about attending Polo on the other side – the side behind the white picket fence (literally) that has that big white tent with the un-missable Mercedez-Benz emblem on it. That is known as the VIP tent, and that is where “Polo” really happens.

The Polo celebration in the VIP tent area was hosted by Gossip Girl hottie Chace Crawford and attended by other notables such as Nicky Hilton, Penn Badgley, Dabney Mercer, Bethenny Frankel, Blake Lively, Nacho Figueras, Eric Villency, Kimberly Guilfoyle, Joe Francis and Brett Ratner. The showdown on the field was between Team White Burch and Team Jumeirah Culu Culu, if you happened to be watching Polo at all.

The invite only, well healed crowd of good looking and well dressed power players under the tents is REALLY why most people go to Polo. There is arguably more action under the tents than on the field itself; in my opinion the guests are more fun to watch than the games. (Especially after a few Perrier-Jouet mini champagne bottles or several signature summer 2008 Roc Candy Cocktails and Bubbles n’ Blues from Hpnotiq.)

After observing the mixing and mingling from the sidelines, I ran into Alexa Greenstadt and her brother Kyle Heller, to whom I admitted I wasn’t even watching the matches. They asked, “Who was?” I told them that I think 80% of the people aren’t even watching polo (which IS a sign of a GOOD party) and Kyle said I was being generous with my estimation. He thinks 92% are NOT watching Polo. Clearly Polo is a very social sport.

When the main tent was in full swing, I slipped over to the T-Mobile Sidekick Lounge which is like a party inside of the party. Groove-worthy beats were being spun by the friendly and fabulous DJ Sky Nellor and I was warmly greeted by Rich Thomas and Tamie Peters Thomas, who are ubiquitous to Bridgehampton Polo. Instead of needing a pretty IT girl on my arm, all I had to do to get photographed was hold the limited edition T-Mobile Sidekick LX designed by renowned skateboarder Tony Hawk. Not to overdo skater lingo, but that piece of tech is pretty Rad! The Sidekick turned out to be the most photographed girl in the tent (making Sidekick LX the new Tinsley Mortimer)!

I then caught up with Devorah Rose and Emily Brill before making my way over to Kristian Laliberte and Timo Weiland to discuss the great new website Hamptons Undercover, for which they were later throwing an intimate launch party for at the Social Life Estate. I got all my best info in the Sidekick Lounge, so I recommend you go there.

After checking out Jon Gruen's Grueneyes/TagHeuer and the Black Watch Polo Collection from Ralph Lauren, I made my way back to the tents to visit my “about to be” most successful friend from high school, Monica Ferguson Murphy and her Buiz partner Becca Brown, who founded SoleMates. They had a concession under the tents selling a product that they invented and recently launched, which are these plastic things that attach to the bottom of a high heel to prevent the heel from sinking into the grass in situations like, say, Polo!

They call it the High Heeler and it's genius! I saw the newscaster from New 12 Long Island trotting around the tents wearing her SoleMates High Heeler and that’s when I realized that Monica is about to be the most successful person in our High School graduating class! (And she didn’t even invent Post-Its.)

Other than that I wolfed down a scallop and tomato cone and mini tuna burger provided by RCano and some mini cupcakes from Crumbs and enjoyed my times. It was a gorgeous day and I can tell you everything that went down under those tents. I can’t tell you, however, who won the actual Polo match. I was too busy playing “the game” under the tents. Like I said, the party that accompanies Polo is the real attraction.

[Images via Hangin' in the Hamptons]