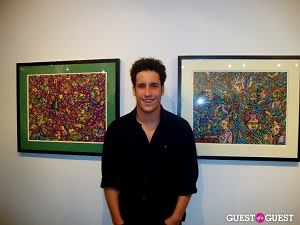 In a town packed to the gills with art and galleries, it's not often that a show stops you in your tracks and forces you to examine your own world. But the opening of Matthew Denton Burrows' solo show, "What Will It Take To Make You See," at Bridgehampton's Kathryn Markel Fine Arts gallery on Main Street did just that.

The show, which features graphic, intricately weaved explosions of color and ideas, questions the social norms most of us accept without thought. In his art, Burrows creates what one of his Lehigh art professors termed

"a mashup of observed and imagined, of high and low, of gravity and weightlessness, morality and vice." 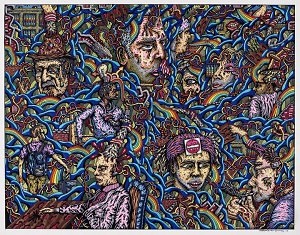 His images challenge what he sees as our "normal situation" - forces of war, racism, law, love, hate, happiness, sadness, indifference, work, poverty, college, stress, pressure and desire into vibrant, intricate pieces that have already received much acclaim in the art world. 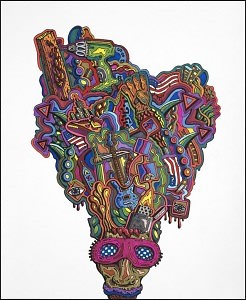 viewer constantly noticing new aspects of the images he creates. According to Burrows, the pieces are never planned out but instead flow organically from one centralized thought into another, until a vibrant, byzantine image, encapsulating what Burrows terms "A search for more than the life I see," appears on the paper.

Although the up-and-coming artist has already had his work featured in shows across the country, the Markel exhibition, which opened July 31, is his first solo outing. In a sign of his rising popularity, several of the pieces have already been purchased, and the show will still be running through August 8.  And even though we doubt the unsold pieces will remain that way for long, this is one new artist we recommend you invest in before he becomes truly big.