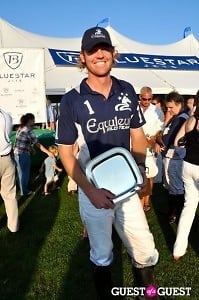 You may have never heard of Kris Kampsen before, but you definitely cannot miss him on a polo field. The 6’5” polo player with long red hair from Tampa, Florida is back in the Hamptons after a six-year hiatus (playing in Santa Barbara) and he making himself very apparent. On Saturday at the 5th weekend of Bridgehampton polo, Kampsen led his team Equuleus to a 7-5 victory over KIG and earned himself MVP honors by scoring 6 of the 7 goals for his team.

Surely the tallest polo player we’ve come across, whether on he is on the trophy stand towering over the competition or walking down the street in Southampton on his way to his favorite restaurant, Kampsen stands out above the crowd and the opposition.

Kampsen’s got the polo community in the Hampton’s buzzing, but we were able to score an interview with this summer’s hotshot polo player to talk about all his action on and off the field. Congratulations on being MVP this past weekend! I hear you won a Sector “no limits” watch, is that it on your wrist?

Thank you! I did win an awesome Sector watch but the one on my wrist is actually the Devon Tread 1. 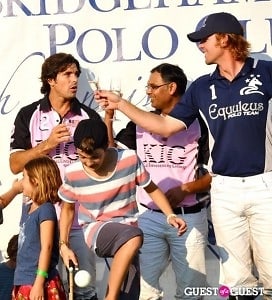 Since you’ve already won MVP, what are your goals for the rest of the season?

Well, it is never a goal of mine to win MVP but it definitely is always a plus. My goal for the rest of the season is of course to win the Hamptons Cup.

How do you think Hamptons Polo squares off to polo being played elsewhere this summer?

Polo in the Hamptons is for sure one of the more competitive tournaments being played this summer. Actually it is much more competitive then I remember it years ago when I played here. In my mind it can go toe to toe any day with Santa Barbara.

How does it feel to be back in the Hamptons?

It feels amazing to be back. I am an East Coast boy for sure and I really enjoy the Hamptons there is a lot to do out here and never a dull moment. A lot of my friends are here and I don’t get a lot of time to see them when I’m traveling so it’s awesome to spend some time with them this summer.

Other then the high-goal polo, what is your favorite part about being out here in the Hamptons this summer?

I’m just really enjoying being somewhere different then where my usual schedule takes me, and to be honest polo is definitely my favorite part so that’s a hard question, but I am getting into golf now in my free time, and the weather this summer has been great for golf!

So it is safe to say you would like to come back? 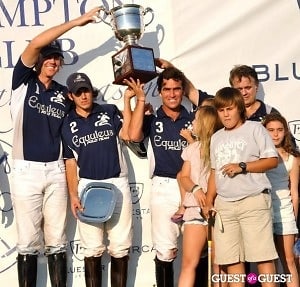 I love to get back here next summer, unfortunately that’s not my decision so I’m just going to keep playing my best and hopefully get hired here again.

In between all the training and games going on, have you found time to venture out of the barn and are there any late night hot spots where we might find you?

The time I have is limited, being that polo is my number one priority while I’m here, but I have gotten a chance to venture some. I am not a late night kind of guy but I have been going to a lot of dinners with friends, and yes sometimes they end up being later then I expected (not on game nights of course). That being said you may have seen me at Georgica or South Pointe once or twice this summer.

So…any specific meal you like to have before a big game?

Carbs seem to do the trick for me as a game night meal so it is usually pasta. My friends cook up a mean spaghetti and meatballs, but if I had to go out for a bowl it would be Tutto Il Giorno in Southampton.

Kris Kampsen will be spending the rest of the summer here in the Hampton’s playing polo so keep your eyes peeled for the handsome red-headed giant. Take it from me, the resident polo groupie, it is not going to be as hard as you think because he is definitely the next hot thing to shake this town up.