[Picture via Hamptons] If you remember not too long ago, we were scrambling to find activities to entertain ourselves come Monday, when the majority of our weekend friends boarded the Jitney to head back to Manhattan (suckers). Luckily, we got loads of feedback from readers, telling us their suggestions for everything from bars to restaurants. When we heard about the $25 prix fare menu and drink specials at Georgica, thanks to DJ M, that happen every Monday, we knew where we would be after we wrapped up the first workday of the week. But we were not prepared for what head chefs Robert Hesse and Seth Levine had in store for us.

Apparently, Monday nights are "industry night" at Georgica, where people come to relax, and can take refuge in half-priced drinks. While some may have called the place relatively empty, we can verify - it was very busy for a Monday night in the Hamptons in the middle of June. And we can tell you why: the food. Okay, we're sure the atmosphere, and great service has a lot to do with it (with Andy Roderick look-alike waiters), but it's the food that's really going to pull you in. We were lucky enough to spend the majority of our dinner chatting with Antonio Fuccio, the managing partner of Georgica, and Robert Hesse, one of the head chefs (you may also remember him from Hell's Kitchen). Hesse went over the menu with us, telling us some of his personal favorites before we ordered, including the diver's scallops and truffle ravioli (which was even included on the prix fare menu for the night).

On top of the great deal, there was even more reason for us to be glad we chose Monday night for dinner: Normally Rob spends weekends in the kitchen working. Mondays are his nights to give the rest of his staff a chance behind the stove, and his chance to mingle with customers.

While the three of us obviously enjoy each other's company (can you imagine living in our house if we didn't!?), thanks to Antonio and Rob, and their conversation about their lives, Georgica's start-up, and Hesse's history as a chef, the dinner was spot-on.

Robert Hesse is no stranger to the Hamptons, having grown up in Quogue. Apparently though, the summer vacation haven wasn't cutting it for him, as he headed out at 17 to start getting jobs at top-notch restaurants. Hesse found no shame in knocking on backdoors to get any job he could, whether it be peeling potatoes or cleaning toilets, and racked up an impressive count of twenty states that's he's previously lived in. Four months here, six months there - whatever would give him the opportunity to observe a head chef. Apparently, it paid off, as it landed him a spot on Hell's Kitchen, coming in 3rd (Hesse had to leave due to a health problem, not because of an actual elimination). One of his favorite spots along the path to success was the dirty South, something that definitely shows in his flavors and portions. Compared to many of the restaurants on the East End, his entrees are not only enough to fill you, but you probably won't even be able to finish - no matter how much you want to.

So just how successful is Chef Robert Hesse? Enough to have now started a cult following here at GofG. Okay, so that may not say much, but he has already served the likes of Mariah Carey and the Countess de Lesseps and we're sure lots more Hamptonites and celebs that also went ga-ga over his food. But we can't give Robert full credit - Georgica, unlike most restaurants, actually has TWO head chefs. Seth Levine rules over the kitchen as well. A rarity but not a problem since, as Rob says, the two don't fight. {Picture via Wire Image] 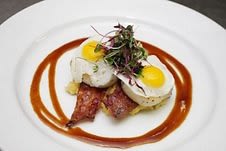 We took the Chef's recommendations and went with the diver's scallops (Rob said if he was personified in a dish, this would be it). Kendra said they were the best scallops she ever had, and I think they might have been the best thing I ever had... in general. Or close at least. Wrapped in bacon, topped with an egg, served over a roasted corn pudding with an apple cider reduction, it was the perfect way to start our dinner. And it is in fact, Hesse's signature dish. We also tried out the truffle lobster mac and cheese, pork tenderloin with cabbage and roasted apples, truffle pommes frites, rigatoni with sausage and littleneck clams (his grandmother's recipe), and the truffle raivoli ("I get dates with that dish"). Can you tell we went a little truffle crazy? We were too full to even touch the dessert menu, but have learned our lesson for next time we're there - and believe us, there will be many next times to come.

Even though we loved everything we ordered, we didn't even dent the list of things we want to try on the menu. And though we can't guarantee you will see our shining faces there every Monday, it's a pretty sure bet we'll be back on the regular. We'd suggest you do the same, before mid-July rolls around - we don't even want to think about the seating situation then. Antonio, hold a table for us? 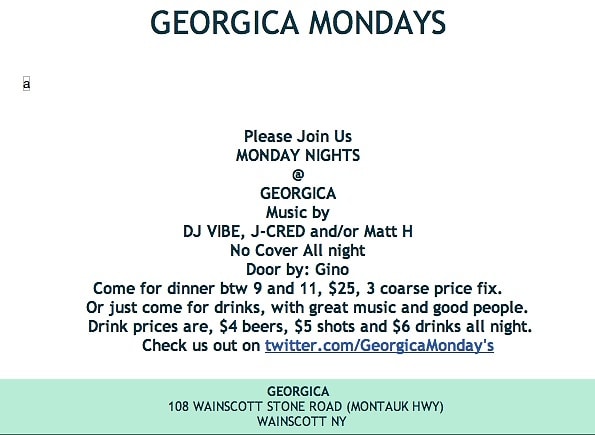