Go HERE for More Photos and Tag Yourself and Your Friends!

Montauk Yacht Club was the place to be on Tuesday night.  The tall, dark, handsome and oh-so-talented Brendan O'Hara from The Big Bounce gave a last-minute performance to a crew hanging out in the dining room at MYC, and though it meant hustling our buns out to Montauk at the last minute, we'd say this was definitely a night we're glad we didn't miss.  For those of you who did, here's a recap...

Though we only made it in time for the last of three brief sets, we have a feeling it was probably the best, with everyone feeling a little looser after Chef Robbin Haas' intoxicating cooking (and, likely, a choice or two from the cocktail list).  With whiskey at one end of the piano, tequila at the other, O'Hara let his fingers wildly dance across the keys, belting original songs like "Champagne and Apple Juice" and "Take Your Time" with an ease all too perfect for the laid-back setting. 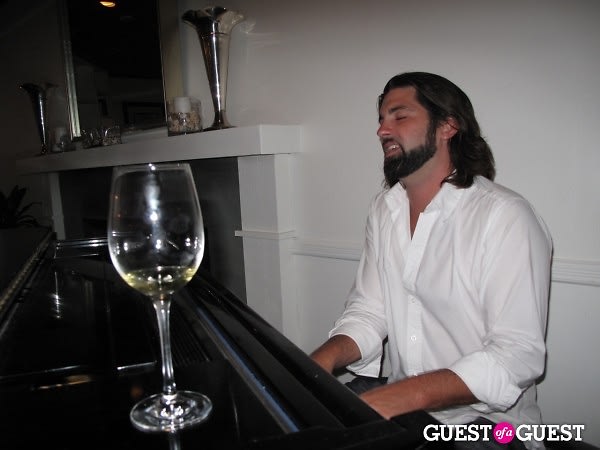 To his surprise, the crowd, a bunch of "white kids" as he called us (and rightfully so) - including Surf Lodge co-owner Rob McKinley, Steve Kasuba from MYC,  and fellow musician and surf instructor Dustin Franks - had quite the rhythm.  He even divulged that it was nice to perform for a smaller crowd and "not have the fucking chatter," elaborating:

"I never judge, but it's nice to be able to play music for people who listen."

Not only did we listen, but we even sang along.  First, to a mash-up including everything from "Lean on Me" to "Three Little Birds" to Beastie Boys selections, and then to a strangely catchy original called "Alpha Romeo." Even though we knew we were slowly falling into a trap of singing along to the Big O of a song about filatio, we just couldn't help ourselves.  What can we say, we've got a thing for musicians.  With words like these, how can we not...

"You like it rough, and you like it fast. I can do whatever, hold on to your hat."

Right.  See what we mean?

To end off the night, O'Hara did a cover of Damien Rice's "The Blower's Daughter" that had the entire crowd, even the men, in a mild swoon.

Visit BrendanOhara.org for more information and to purchase their new album, Champagne and Apple Juice.