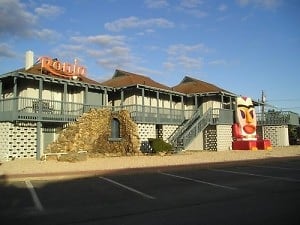 Curbed recently reported that Chris Jones (of Solé East and Solé East Beach) and Larry Seidlick purchased the run-down Ronjo Hotel with the intention of fully renovating the property and turning it into a more upscale hotel called The Montauk Beach House.

The pair bought the Ronjo for about $5 million, and then purchased an alley way near the hotel for $35,000. The sale of the alley stirred up some political trouble for Jones and Seidlick, though, as some democrats on the Town Board have expressed concern that the sale price of the alley was too low.

According to The East Hampton Press, when two democrats on the Town Board asked how he came up with the number $35,000, republican Supervisor Bill Wilkinson said "I plucked it out of the air."

Curbed notes that the low-sale price may be a "political favor" for Jones and Seidlick, especially because Seidlick is rumored to be a major republican donor. Curbed also points out that The East Hampton Press,

"...call(s) on the public to get behind to permissive referendum which would put the sale up for a vote."

We're not sure what this means for the future of The Montauk Beach House, but if it doesn't work out this won't be the first time plans have fell through for Chris Jones, whose MTK Festival was cancelled last summer due to poor ticket sales.