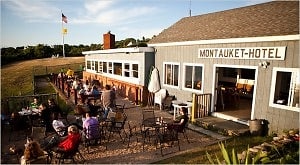 The last few years have seen a large number of Montauk hotels and restaurants sold and renovated into hip locales, a trend that has drawn ire from those who saw the town as a holdout from the moneyed gentrification of the Hamptons.

Now, as the Montauket Hotel searches for a buyer, regulars fear this summer may be the end of an era. Several other Montauk vestiges, including the Shebeen, the Shepherd's Neck Inn and the Crow's Nest, have been renovated and turned into boutique hotels, drawing trendy club-goers and scene-seekers.

The New York Times published an interesting analysis of the transformation today, describing a culture clash that has emerged "as new operators turn mildewed budget lodgings into whitewashed boutique hotels, magnets for the moneyed and hip."

In the last three years, several Montauk mainstays have seen major transformations, going from the End to the Destination. The Shebeen was purchased by Cain Leisure, the nightlife group behind Cain and Goldbar, and turned into Surf Lodge, the Shepherd's Neck Inn sold to Wavestone Properties and turned into Solé East and the Crow's Nest sold to hotelier Sean MacPherson, who operates the Jane. The Memory Motel, famous for inspiring a Rolling Stones song of the same name, was also reportedly sold this summer.

However, to the cheers of many a local Montauk resident, the transformation may be near the end of its run -- according to the Times, around 70 percent of Montauk is protected from development and "zoning ordinances make it difficult to change land use or increase density."