He is known for making us laugh with his famed Bill Clinton impersonation on "SNL," but alum Darrell Hammond was not laughing after a car accident Saturday. Hammond has been out east preforming his one-man play "Tru" at Sag Harbor's Bay Street Theater. This past Saturday was supposed to be his final performance, but it had to be canceled after he was hurt in a car crash. 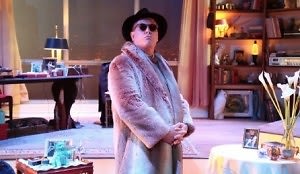 It has been reported that Darrell was riding in the passenger seat with a friend, in the village of Sag Harbor, when their car was swiped by a vehicle that was traveling at about 70 miles an hour. Although no serious injuries were reported, the funny man is home and pretty bruised up. Note to the vacationing Hamptonites, slow your roll, driving at speeds like that through a small village loaded with pedestrians, doesn't make you look like a hot shot, it makes you look like a ass.