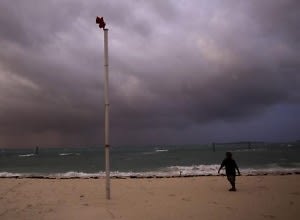 [Photo via] Hamptonites are scared out of their Sperry's about Hurricane Irene coming to town! Turns out the storm may be boosted up to a Category 4, and it has been announced the Hamptons will be getting hit HARD. People are more nervous about this than their in-laws coming to town, in fact the LIRR is shutting down some of their lines headed to the Hamptons, and some of the best events are being canceled. ArtWalk, a benefit for the Coalition for the Homeless, was first moved indoors, then two hours later canceled completely! See what else has been canceled, and what events are still on (for now).

ArtWalk, a benefit for the Coalition for the Homeless

Shecky's Presents: Supper Under The Stars (postponed until Septmeber!)

The American Red Cross, Gatsby On The Green

Still Partying! (as of now)

Do you know of any other cancellations or hurricane parties? Leave us a comment in our comment section and check back with us throughout the day for your party cancellation updates!