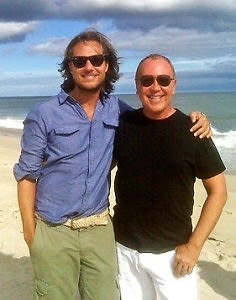 Michael Kors had the ultimate "something blue" this Tuesday when he and his long time partner Lance LePere tied the knot on Dune beach in Southampton! Michael and Lance met back in 1990 when Lance was interning over at Michael Kors's company. [Photo via]

After the legalization of same-sex marriage in New York they expressed their plans to wed, Kors told People,

"Lance and I are very excited to finally be able to have the opportunity to marry in our home state after many years together."[via]

The big day came this Tuesday, with Mayor Mark Epley officiating the private ceremony. In a statement Michael said,

"To marry someone as wonderful and special to me as Lance barefoot on a glorious beach is more than I could have dreamed of." [via]

What a perfect way to celebrate such a happy occasion. Congrats boys!