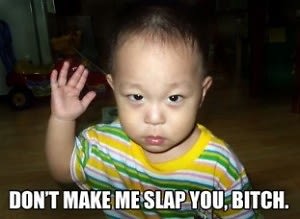 How does the saying go? It is not a party until there is a fight? Did I just make that up? Anyway, you know what I am trying to say, once the hands start flying, you know you have thrown a rager. However, when the hands flying are your mother's, and they are at your face, you know shit just hit the fan. [Photo via]

According to West Hampton Patch, a 19-year-old Manhasset girl decided to throw a party at her parents Westhampton estate. Okay, hold up for one second:

2) I grew up not far from Manhasset, those chicks know how to throw down.

3) I don't get why people even consider Westhampton part of the Hamptons, it's exit 70.

Okay, back to the story, so at around 9:15 pm on August 3rd (mid-week party) the Westhampton Beach Village Police broke up the under-age drinking shindig and ended up arresting the "teen" for violating Suffolk County’s social host law. As if that didn't suck enough for the college kid, (who lets be honest, has most likely has partied way harder at school than on a Wednesday night with a few friends in Westhampton) her mom, Cynthia Dilonardo enters. With the cops still at the home, the (rightfully so) pissed mother takes out her anger, disappointment, embarrassment, and probably menopause in a not so justifiable way - she slapped her daughter across the face. YUH-IKES! Making things physical is never a good move, especially towards your daughter and more definitely in front of police. Mrs. Dilonardo will hopefully think twice before her next bitch slap, because this one ended up costing her a second-degree harassment charge.