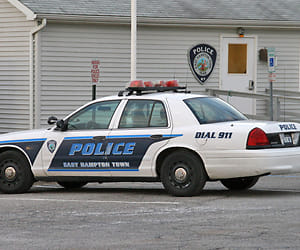 Hoping to start the summer off in the safest way possible, 17 new patrol cars will be stationed throughout the Hamptons in order to crack down on drunk driving, reports Patch. The new initiative, called East End DWI Task Force, goes into effect tomorrow evening, and the cars will come from a number of different police agencies in the area, as well as from the NY state police department.

The crack down is due in large part to the increase in the number of DWI arrests that Suffolk County saw last year, and Suffolk County District Attorney Thomas Spota told Patch that the only way to curb the problem is through a team effort:

“Local police departments in the five towns and villages don’t have the resources to focus solely on drunk and drugged drivers on holiday weekends,” Spota said earlier in the week. “This team strategy will augment local law enforcement and make the expansion of the enforcement action on the East End more mobile and responsive.”

In addition to the 17 cars that will patrol the East End, there will also be a "BAT Mobile"-- a mobile unit which allows police to do on-the-spot breath alcohol testing and has a holding cell for up to four prisoners.

The East End DWI Task Force will begin tomorrow and run at unannounced times throughout the summer season. Though Spota said that he hopes people will continue to spend their summers in the Hamptons, he made it clear that the main goal this summer is to keep locals and visitors safe:

"We want people to come. But don't drink and drive. If they do, they're going to be arrested. It's as simple as that."